Pensacola - The Gulf Coast Gators made their home debut Saturday night under the lights against the Steel City Raptors (SC) from Birmingham.

QB Tyrone Jones (11-16 184 yds 2TD, 2TD rush) got the offense rolling after the Gators’ defense held the Raptors to a three-and-out and recovered a botched punt attempt inside the SC twenty yard line. Jones would score the games first points running off left end for a 6 yard TD. Jones would later find WR Labarron Chambers (4-53yds TD) for a 25 yard TD pass down the sideline to extend the lead to 14-0! RB Jamarius Green (7-42yds 2TD) added the Gators final score of the half for a 20-0 lead at the break.

The second half would be more of the same for Jones, connecting with WR Quan Johnson (6-127 yds) on a screen play that set up a 2 yard Jones TD run. Jones would add another TD toss in the 3rd quarter, this time to WR Jordan Ewing (1-4yds TD) on a quick slant inside the SC five yard line. Green would add his second score in the fourth quarter to give the Gators the 38-0 lead.

The defense, led by LB Isaac Warren (6 tackles) and DE Eugene Robinson (6 tackles, Sack) swarmed the Raptor offense all night to register their first shutout of the season!

The Gators (2-1) travel to Lacombe, Louisiana next Saturday to face the Bayou Lacombe Cardinals (1-1) as they open conference play!

Gators fall on the road to 3rd ranked Cobras!

Monticello, Fl. - The 2nd ranked Gators traveled just east of Tallahassee to face the 3rd ranked Georgia Cobras on Saturday in the APDFL Game of the Week!

The Gators got started fast with a 46 yard TD run by QB Tyrone Jones (16-159 yds 2 TD rushing) on the games first possession but failed to add any points the rest of the half. After a David Flowers field goal attempt to close out the first half was blocked, the Gators clung to a 7-6 halftime lead.

The Cobras would return the half's opening kickoff back for a score to take their first lead of the game 12-7. They would add to their lead with a late 3rd quarter TD pass and 2-pt try to go up 20-7.

The Gators would rally! DE Shaquille Campbell (2 sacks, 3 TFL, return TD) scooped up a loose ball forced by DT Brian Samuel's strip sack of Cobra QB Marcus Brooks and rumbled 47 yards to the end zone to close the lead to 20-14. On the Gators' next possession, QB Tyrone Jones would bolt 65 yards for six on the drives only play! A missed Flowers PAT would leave the game tied at 20-20.

Late in the 4th quarter, the Cobras were able to retake the lead after a controversial call derailed the Gator momentum. The Gators would fall to the 3rd ranked Cobras 26-20.

The Gators (1-1) return to Pensacola for the home opener this Saturday night against the Steel City Raptors (0-1) from Birmingham, Al.

Phenix City, Al. - The Gulf Coast Gators kicked off the 2020 APDFL season in the annual Commissioner’s Classic against the Gators from Central Florida (CF) in a game many tagged as the #GatorBowl.

Gulf Coast (GC) came into the game as the favorite, and didn’t disappoint! The GC special teams got the scoring started when safety JB Brazelton recovered a botched punt attempt in the end zone. With the game tied 6-6 early, GC cornerback LaBarron Mallory snagged the first of his three interceptions and returned it 30 yards for a score. QB Tyrone Jones (12-17 172 yds 3TD, 11-89 yds rush) would lead a touchdown drive to close out the half when he found RB Matt Rowser (5-93 TD rec) quarantined down the left sideline for a 51 yard TD and a 20-6 lead.

The second half was more of the same for GC when Darrius Garrett took the opening kick 82 yards to paydirt and a 27-6 lead. Central Florida would attempt to make it a game pulling within a score, but the GC offense was just too much. RB Jamarius Green (12-48 yds TD) added a four yard TD run in the third quarter and Tyrone Jones would connect on two more TD tosses, first to WR Tahree Mims (1-20 yds TD) and later on TE Wayne Jackson (1-16 yds TD) to cement the 46-20 victory!

The GC defense looked stout as usual. 2019 APDFL sack leader Eugene Robinson picked up where he left off racking up four sacks and a tackle for loss. Linebackers Isaac Warren (7 tkls) and Anthony Brown (4 tkls) led the way defensively along with Defensive Player of the Game Labarron Mallory (3 int, TD).

The Gulf Coast Gators travel to Monticello, Fl. next Saturday to face last season’s APDFL East Champion Georgia Cobras. The Gators handed the Cobras their only regular season loss in ‘19. 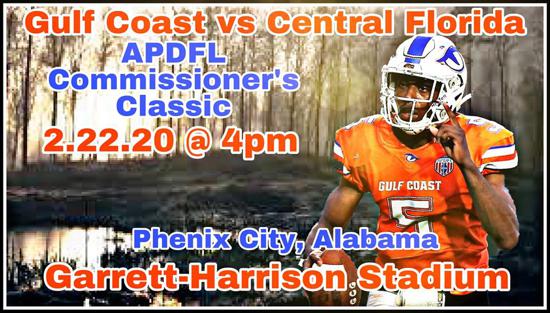 Pensacola, Fl. - The Gulf Coast Gators kickoff the 2020 APDFL season in just over a month at the league’s annual Commissioner’s Classic.

Coming of an 11-2 campaign and a gut wrenching loss to the 2019 APDFL Champion Mississippi Dynasty in the Western Conference Final, the Gators are eager to get back on the field.

With the majority of the 13 All-Star selections returning, and some major additions for 2020, the team is poised to make another run for the President’s Cup!

The Gator’s will boast a championship caliber defense once again. APDFL sack leader Eugene Robinson (23 sacks) and FS Rico Ruffin (7 Interceptions) return to lead a star studded cast in 2020.  Leading tackler Isaac Warren (68 tackles) and Anthony Brown return, with the addition of APDFL Linebacker of the Year Harry Burke (Alabama Tigers) and former Texas A&M standout Steven Jenkins, the Gators linebacker group should be among the best in the league. The talented secondary (17 interceptions in 2019) returns CBs Dee Garrett and Labarron Mallory, along with Ruffin and SS J.B. Brazelton.

“We’ve got an unbelievable roster” said Head Coach Phil Carver, “If we can put it all together on the field and play for each other, we’ll be where we expect to be when the dust settles!”.

The Gators, entering their third season (21-4 overall record), may have the best chance to dethrone the three time champion Dynasty. Only time will tell! #GoGators

"Here at the law firm of Ward & Barnes, P.A., in Pensacola, Florida, we focus primarily on personal injury law. We promise to do all we can to help resolve your matter and improve the likelihood that you will receive the full amount of compensation for the injuries and losses you suffered as the result of any of the following: Auto accidents, Mesothelioma, Defective products, Wrongful death, Medical malpractice, Slips, trips and falls. Life is unpredictable, and you never know when tragedy will strike. Rest assured, however, that you can rely on the legal professionals at Ward & Barnes, P.A., to see you through your difficult and uncertain time and to provide the quality, effective legal counsel and support when you need it the most."

When you’re ready to buy, refinance or renovate, PrimeLending is the proven lender you can trust to help you achieve your homeownership goals. We have more options to fit your financial needs, more experience to help you make confident decisions, and a streamlined process to fit your timeline. Your needs are our number one priority, and with PrimeLending by your side, we’ll guide you every step of the way to your perfect home loan.