Cinderella Is Headed To The Ball!! 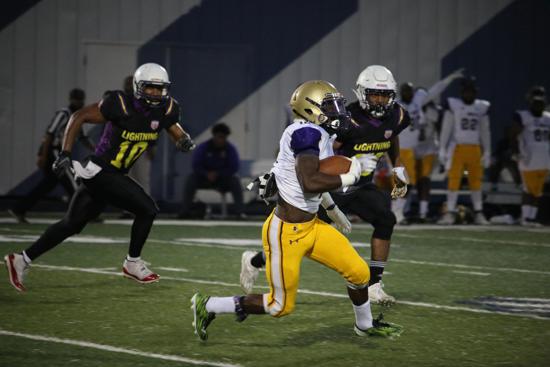 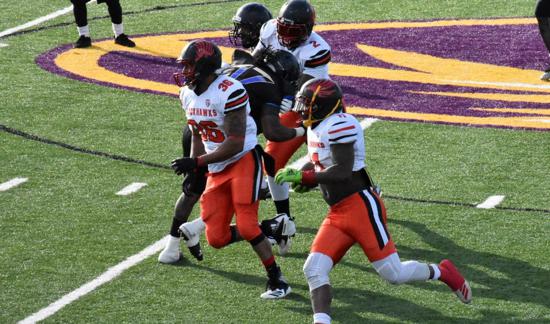 Cinderella Is Headed To The Ball!!

Harvey, LA – The 2021 APDFL National Presidents Cup Championship has arrived and the path for the two teams competing could not have been any more different.

Alabama Blackhawks were crowned Eastern Conference Champions as the No. 2 seed in the East. On their way to reaching the Presidents Cup Championship game, they outscored their 3 post-season opponents by a combined score of 106 – 27. Their third straight conference appearance has proven to be the golden number as they will look to continue their dominance this weekend in the Championship game. Their round 1 match-up saw them take on an East Alabama Predators team that they had defeated just weeks earlier. Without hesitation, they repeated their dominance defeating the Predators by a score of 35-7. Facing the No. 3 seeded Columbus Storm, most anticipated a highly defensive and competitive contest. However, Blackhawks once again proved that they are on a mission and that mission has not yet been fulfilled as they dominated the Storm by a score of 49-14. The conference championship showcased two high powered offensive attacks as they played host for the second time this season to the Georgia Thrashers. However, mother-nature would have it her way and the constant downpour of rain limited how both teams would be able to perform. With the game late in the 3rd, and the Blackhawks up by a score of 22-6, the game was called due to safety concerns from the weather advancing the Blackhawks to the National Championship game.

On the other hand, Western Conference Champions Crescent City Kings, were tested throughout their post-season journey. They took to the road as the conferences No. 7 team knowing that they would have to play some of their best football to date if they were to pull off the unthinkable. In each contest, and with a little assistant from up above, they were able to do just that as they knocked off the conferences No. 1, No. 2, and No. 3 seeded teams to advance to the Championship game. They started their journey in Pensacola, FL as they faced the conferences No. 2 seed in the Gulf Coast Gators. A late field goal put them on top as they were victorious 33-32. Next, they faced the conferences No. 1 seed, Bayou Lacombe Cardinals. As the only team to defeat the Cardinals during the regular season, they felt they had the recipe to do so. With two back-to-back missed field goal attempts by the Cardinals that would have sealed the game, the Kings went on to be victorious 23-21. Finally, they faced the 3-time Presidents Cup National Champions and No. 3 seeded Mississippi Dynasty in the conference championship. With the game tied at 14 and less than 20 seconds remaining on the clock, Kings were able to force a turnover on their own 1 yard line and instead of giving up points, forced the game to go into overtime. With both teams scoring in the overtime period, a missed extra-point attempt for the Dynasty sealed their fate and sent the Kings to the National Championship game.

So here we are! Two teams with two very different courses that landed them in the National Championship game. Let’s see how this one is going to play out.

Alabama Blackhawks (Eastern Conference) vs Crescent Kings (Western Conference)
Harvey, LA
5:00PM cst.
Alabama Blackhawks come into this contest with all the pressure on their shoulders. Having completed the regular season with just 1 loss and having dominated their opponents on their way, most see them to be highly favored entering the championship game. Their offensive attack is led by one of the most prolific signal callers to ever suit up in the APDFL. QB1, Nathan Caldwell, will be playing in the National Championship game for the 3rd time and will be looking for his first victory as well as the first championship title for the Eastern Conference. However, Blackhawks are far from one dimensional. Their RB core has the ability to win the game on the ground just as well. Led by RB Tye Dunklin, the Kings will have their hands full in trying to stop this Blackhawks offensive attack. The defense is stout just as well. Possibly the best front seven in the country, they are sure to get after the opposing teams QB on each and every play. With that said, this week won’t be as easy as most would expect. The Kings have flown under the radar for most of the season and therefore, most will come into this game not know what to expect. The Blackhawks front seven will be tested as they will face the most sound offensive line that they have faced all season. An offensive line that won’t be full of over the top standouts but an offensive line that can play as a unit and on one accord. That can be dangerous! In conjunction, when all the hype at the QB position has settled, one must also recognize the individual at the helm. QB1, Jyron Walters, has proven time and time again that he could possibly be the best in the land. Coming into the 2021 season, Walter maintained the title of single game passing leader as well as all-time passing yards leader. In other words, he can flat out throw the ball. The connection with WR Jamiah Sorapuru has proven to be a powerful connection over the course of the season.

The question then is will the Kings defense be able to control the offensive attack that they will face or will they force the Kings into a shoot-out. If the defense is able to keep the game close going into the 4th quarter the Kings might just once again shock the world. Kicker, Jeffrey Hampton, has had 3 walk-off victories this season and is primed for yet another. However, if the Kings defense is not able to force turnovers and play lights out football, then this one could possibly get out of control. For the record however, the hardest hitter on the field, DB Jeffrey Hampton, only needs one play to change the course and thought process of the entire offensive attack. This, with the game being played right outside of New Orleans, LA which is come to the Kings. Combined with what has seemed to be fate, should make this a very good game.
Crescent City King – 26
Alabama Blackhawks – 24

There you have it! The APDFL National Presidents Cup Championship predictions are in. I can’t ever predict against fate and it seems as if this is the year of the King. You disagree, then simply PROVE IT WRONG!!