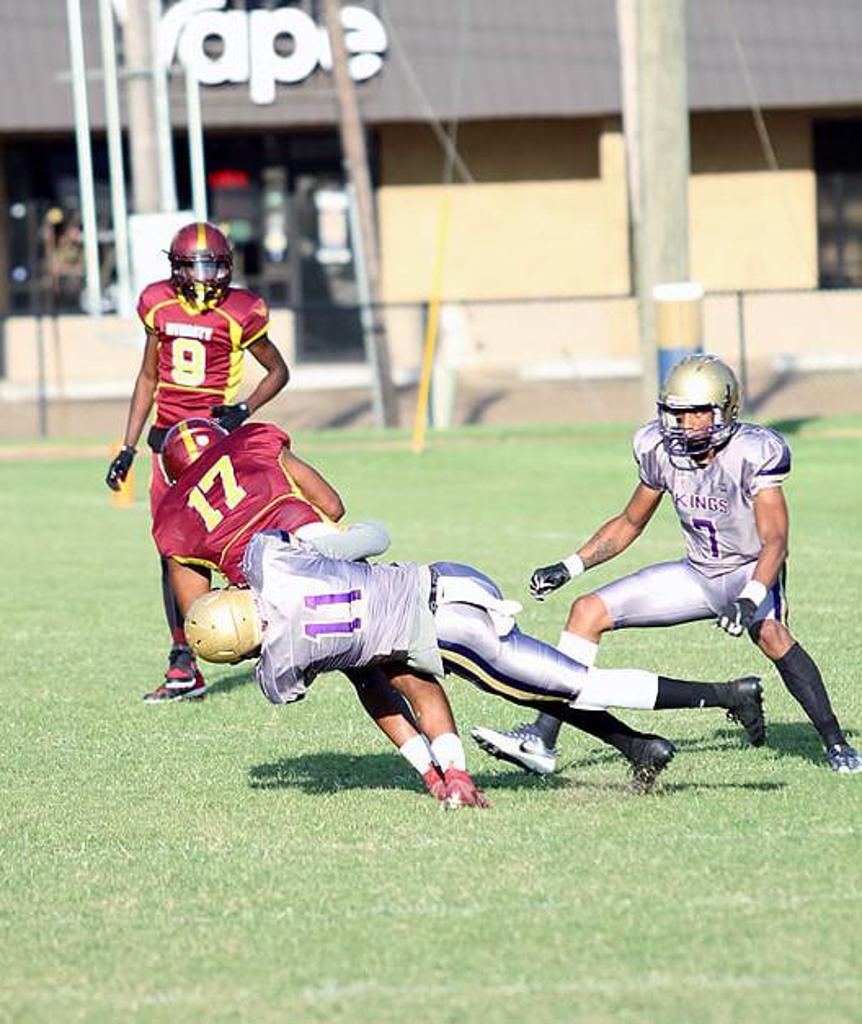 Dynasty Host Kings In Game of the Week

Jacksonville, FL – It’s Fire Prevention week across the APDFL this week as we celebrate first responders across the country. Let’s take a look at this weekend's matchups.

(25) Georgia Noles (0-2) @ (13) Greater Pensacola Jets (2-1),
Pensacola, FL
4:00pm cst
Jets have been flying high since dropping their season opener. The air attack has seemed to take flight with the return of QB1, Tyrone Jones. The Noles will look to secure their first victory of the season as they head on the road to Pensacola. To pull off the upset they will need another outstanding all around team effort as they did in last weekends game. Although they were unable to pull off the victory a week ago, they did show a great deal of improvement which could possibly be the key. Playing at home, the Jets will prove to be a bit too much for the Noles.
Greater Pensacola Jets – 29
Georgia Noles – 16

(24) Arkansas Sharks (0-1) @ (16) Pike County Titans (1-2),
McComb, MS
4:30pm cst
Titans are looking to return to fashion as early in the season they find themselves digging out of a hole. If they want to bounce back to their level of play from a season ago they will need to do so starting with this weekends game. Sharks have only taken to the field once thus far this season and will be excited to get back to action. How they used the time off will be reflected in this weekends contest. Playing on the road is always an obstacle and it will prove to be more of the same this weekend.
Pike County Titans – 22
Arkansas Sharks – 6

(2) Georgia Thrashers (3-0) @ (19) East Alabama Predators (1-2),
Opelika, AL
5:00pm cst
Predators will come into this contest with a fresh new identity coming off of their first victory of the season. They will have to do so against one of the nations top teams and it won’t be easy. Thrashers found themselves in an unexpected battle a week ago. Although they were able to pull out the victory, a lack luster performance this weekend could pose an issue. With the Predators not playing up to their normal standard thus far this season, an upset this weekend is highly unlikely.
Georgia Thrashers – 36
East Alabama Predators – 12

(5) Bayou Lacombe Cardinals (3-0) @ (11) Alabama Blackhawks (2-1),
Birmingham, AL
7:00pm cst
After a traumatic off-season, Blackhawks came up short in their season opener. Since that time they have been overlooked by just about everyone across the league and counted out. However, they have been slowly improving on a weekly basis as the new core of young guys begin the gel together. Cardinals are one of the most complete organizations in the country. With a high performing offense that can score at will, and a “bend but don’t break” defense that applies pressure on every down, they will come into this contest prepared for the match-up. There is however, one concern that they enter this contest with. Cardinals tend to come out slow and then turn it on as the game progresses. If that is the plan for this weekend they will likely find themselves coming up short. Then again, they seem to always find a way to pull out the win.
Bayou Lacombe Cardinals – 17
Alabama Blackhawks – 14

(9) Tuskegee Ayrmen (2-1) @ (20) Tri-City Bengals (0-2),
Panama City, FL
6:00pm cst
Ayrmen are looking to bounce back from a “Thrashing” in Atlanta. With a bye week under their belt, how they utilized that time will be on full display. Bengals are looking for their first victory of the season. Having been competitive in their first two contests, and playing at home, they should have an added advantage. Assuming that the Ayrmen travel as a full squad, redemption will be on their mind.
Tuskegee Ayrmen – 12
Tri-City Bengals – 9

(10) Nashville Elite (1-1) @ (27) Steel City Raptors (0-2),
Birmingham, AL
7:00pm cst
Both teams are coming off of a loss and will look to get back in the winning column. Raptors are looking for their first victory of the season. At the same time, they continue to look for their team identity. Coming off of a bye week, Elite will look to make the trip to Birmingham and show that they are prepared to take the next step. Playing at home this weekend should provide the Raptors with the advantage they need however, the lack of team chemistry could pose an issue.
Nashville Elite – 16
Steel City Raptors – 12

(7) Columbus Storm (2-1) @ (6) Florida Falcons (2-0),
Jacksonville, FL
5:00pm est
A nomination for this weeks game of the week, this one should be a good one. Another top 10 match-up in the eastern conference which could possibly showcase what is to come late in June. Both teams have been entertaining early in the season and find themselves on a collision course. Falcons are playing at home and could have a slight advantage by doing so. Storm, unlike some, will be in full force! Having dropped a conference match-up in their season opener, they find themselves in a very big conference game early in the season. Both teams have the ability to put points on the board quickly. The difference here will rest on how the Falcons respond to the constant all-around pressure of the Storm defense.
Columbus Storm – 17
Florida Falcons – 14

GAME OF THE WEEK!!!
(1) Crescent City Kings (2-0) @ (4) Mississippi Dynasty (3-0),
Pearl, MS
6:30pm cst
“The Battle For Supremacy,” as it has been called, is set to kickoff! Kings are the reigning APDFL National Champion and this weekend they face the 3-time back-to-back-to-back APDFL National Champion. Each time these two teams face off it’s an epic battle and typically an instant classic. In the 2021 Western Conference Championship game, Kings pulled off an unexpected upset victory and went on to win their crown. It has been argued that it was this game against the Kings that sent the legend himself, Head Coach Mike Lloyd, into retirement. Can the Dynasty bounce back and right the ship? Both teams had an amazing off season as they leveled up their rosters and deepened their depth charts. With the Dynasty playing at home, a slight advantage goes their way.
Mississippi Dynasty – 18
Crescent City Kings – 16

There you have it! Although late, the predictions are in and the only thing left to do is to play the game. Like I always say, don’t hate the predictions. SIMPLY PROVE THEM WRONG!!