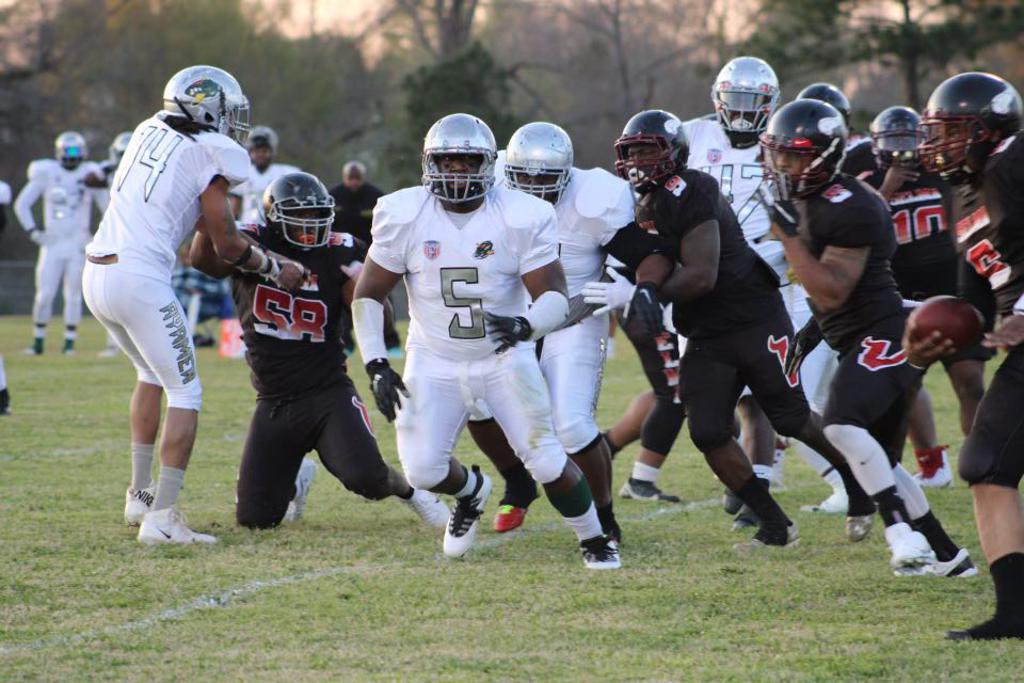 New Orleans, LA – Amateur to Professional Developmental Football League (APDFL) kicks off opening round of the post-season this weekend as teams battle for the right to compete in the APDFL National Presidents’ Cup Championship game to be held in New Orleans, LA on June 26th.

One big shake-up of the post-season took place early this week as the Orlando Phantoms were removed from post-season play and replaced by the East Alabama Predators. This sets the stage for a re-match that the Predators have been looking forward to.

12 teams will compete this weekend, 6 from each conference, in what’s expected to be 6 hard hitting action packed games. No. 1 seeded Bayou Lacombe Cardinals (from the west) and No. 1 seeded Unconquered Cobras (from the east) will both have this weekend off as they await their match-ups in round two. Let’s take a look at this weekends contests.

(7) East Alabama Predators @ (2) Alabama Blackhawks
Pinson, AL
7:00PM cst.
Re-match of a game played just a few weeks ago in which Blackhawks controlled from start to finish. Walking away victorious by a score of 47-6, Blackhawks are sure to come into this contest looking past the Predators and locked-in on figuring out whom their round 2 opponent will be. Looking past an opponent however, will always prove to be a mistake. If the Predators expect to be competitive in this re-match they will need to take a look at what they did in the first match-up and make sure they do the opposite. They have the ability to shock the country in this game as the talent level is there. Problem is Blackhawks are presently firing on all cylinders and in all three components of the game.
Alabama Blackhawks – 48
East Alabama Predators - 12

(6) Metro Atlanta Horsemen @ (3) Columbus Storm
Phenix City, AL
5:00PM est.
This match-up could possibly be the best of the weekend. If not for a few slip ups, Horsemen would be ranked much higher and would be hosting this weekend. However, that is not the case. Both teams are very competitive and when playing their game, have the ability to dominate all aspects of the game. The winner this weekend however, will be decided in the trenches. Horsemen offensive line is the core of their offense. If this group is to get off and set the tone they do have the pieces in place to put points on the board. In a high scoring game this weekend they would surely have the advantage. Problem is their opponent. The front seven that they will face this weekend have proven week-in and week out that they are up for the task. Arguably the best front seven across the league up to this point, they will give the offensive line of the Horsemen a hard time. Complemented by a secondary that has a knack for the ball, points are expected to be low. For the Horsemen to be victorious they will need to control the line of scrimmage and eliminate their turnovers.
Columbus Storm – 12
Metro Atlanta Horsemen – 8

(5) Tuskegee Ayrmen @ (4) Georgia Thrashers
Snellville, GA
7:00PM est.
Possibly the hardest contest in the east to predict. For the Ayrmen it’s really simple. Show up, play your game, and you win. Key rests in simply playing their game. In two of their three losses this season they simply got away from what they do best and came up short. Thrashers are coming off of a long down time having not played in approx. a month. In their last two contests on the field, they came up short in each. If they used the down time appropriately they have the ability to dictate the outcome. For them to be victorious, they will need to ensure that the passing game is able to take off early. However, this falls directly into the strength of the Ayrmen defense, the secondary. Typically one would say, in a contest of this nature at this level, ride with the home team as they will have a full squad. If the 2021 season for the Ayrmen has taught one simple thing it would be this. They maintain a better record on the road than they do at home and they will be at full strength.
Tuskegee Ayrmen – 17
Georgia Thrashers – 16

(7) Crescent City Kings @ (2) Gulf Coast Gators
Pensacola, FL
5:00PM cst.
It may not have been pretty but the Kings were able to fight their way into the post-season. All that is ever necessary is an opportunity and the chance of completing an upset is possible. Many have wrote them off and expect this to not be much of a contest at all. However, the Kings have always come to play and this weekend will be no different. Gators are simply just playing really good football right now and even when they aren’t, they seem to be able to find a way to win. Kings will need to play their best game of the season to be victorious. They will need to eliminate turnovers and score points on just about every possession.
Gulf Coast Gators – 32
Crescent City Kings – 20

(6) Pike County Titans @ (3) Mississippi Dynasty
Pearl, MS
6:30PM cst.
Re-match of a rivalry game played earlier in the season in which the Titans shot out the gun early and appeared to have taken control of the game. After settling in and weathering the storm, Dynasty were able to take control and walk away with the victory. If the outcome is expected to be different this weekend, Titans will need to once again take an early lead and will need to find their footing on the defensive side of the ball. Dynasty seem to have the ability to turn up the heat come post-season and this one isn’t expected to be any different.
Mississippi Dynasty – 34
Pike County Titans – 26

(5) West Mobile 49ers @ (4) Panhandle Crusaders
Pensacola, FL
7:00PM cst.
The regular season match-up ended as an instant classic with Crusaders walking away with a 1-point victory after 49ers failed the 2-point conversion to end the game. This one is expected to be just as entertaining. 49Ers are greatly improved and have displayed that on a weekly basis. To be victorious this weekend, they will need to put that improvement on display once again. Crusaders will be looking to make a statement in this weekends contest. During the regular season they may have been looking past the 49ers and it almost cost them the win. This weekend they are focused and zeroed in.
Panhandle Crusaders – 26
West Mobile 49ers – 22

There you have it! Round 1 of the post-season predictions are in and the only thing left to do is to play the games. As I always say, don’t hate the predictions SIMPLY PROVE THEM WRONG!