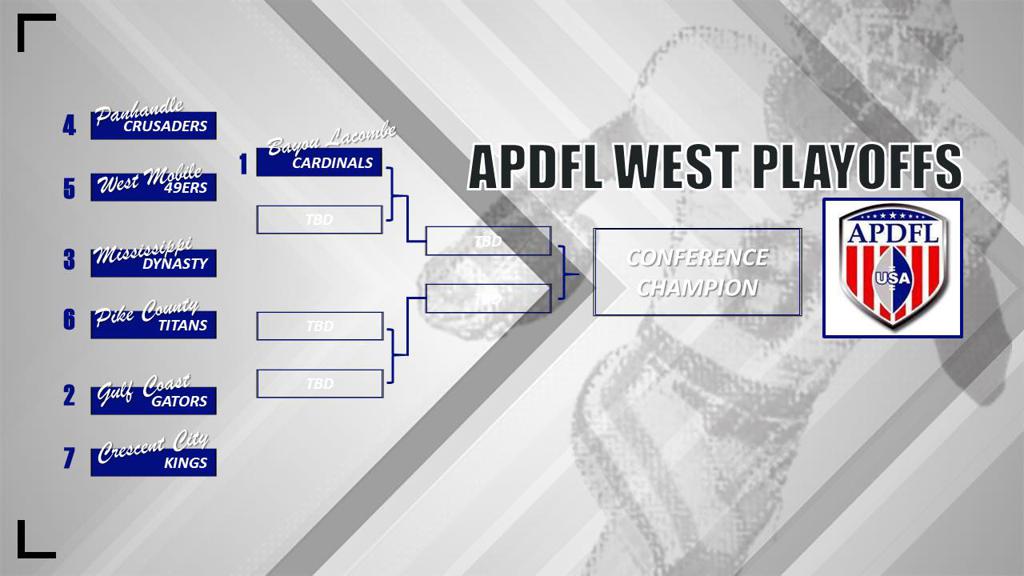 Atlanta, GA – Amateur to Professional Developmental Football League (APDFL) will kick-off the post-season this weekend across the league. All routes leading to New Orleans, LA for the National APDFL President’s Cup Championship. Each year the spring National APDFL Champion has come from the west. Will the west find a way to be victorious yet again.

APDFL West was explained just a week ago and the teams advancing to the post-season remain the same. The task at that time was to determine seeds No. 4 through No. 6. That has now been determined. With Mobile 49ers defeating Pike County Titans this past weekend, they solidified the No. 5 seed while the Titans will be seeded No. 6.

(1) Bayou Lacombe Cardinals – Cardinals obtained the No. 1 seed and home field throughout the post-season a few weeks ago. This weekend they will get the opportunity to scout their conference opponents.

(2) Gulf Coast Gators – Gators traveled to Georgia to defend their right to maintain the No. 2 seed in the west. In a game that they had all but dropped, they showed why it’s important to play the game for a complete 60 minutes as they came out victorious and held onto the No. 2 seed.

(4) Panhandle Crusaders – With Pike County Titans coming up short against West Mobile 49ers this past weekend, Crusaders clinch the No. 4 seed in the Western Conference and will host their firs round contest in a re-match against the 49ers.

(5) West Mobile 49ers – 49ers were able to pull off the victory this past weekend which solidified their position as the No. 5 seed in the west. The win sets up a re-match of one of the leagues most competitive games of the season in which the Crusaders won 21-20.

(6) Pike County Titans – Titans went into their match-up this past weekend with the chance of entering the post-season as the No. 4 seed. The loss solidified their position as the No. 6 team in the west and a first round re-match against Mississippi Dynasty.

(7) Crescent City Kings – Kings were able to fight their way into the post-season with a strong second half of the season. With each passing week they have been improving and as they enter the post-season they seem to be playing their best football to date.