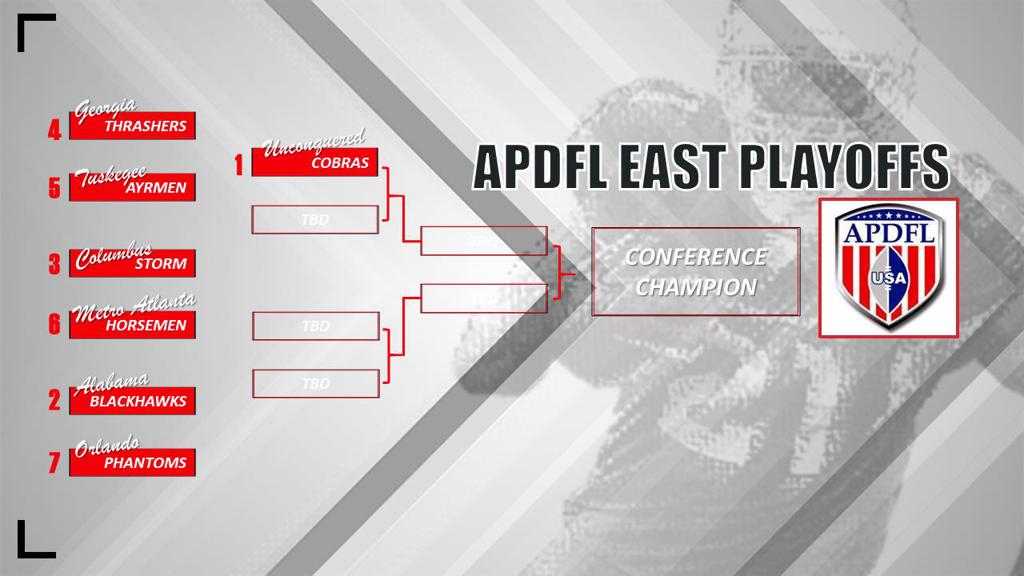 Atlanta, GA – Amateur to Professional Developmental Football League (APDFL) will kick-off the post-season this weekend across the league. All routes leading to New Orleans, LA for the National APDFL President’s Cup Championship.

APDFL East post-season has set up to be one of a kind this season. With Alabama Blackhawks defeating Steel City Raptors in what was a continuation of a game started earlier in the season, much of the Eastern Conference post-season was determined. By coming up short, Raptors were eliminated from post-season play which typically would have made the contest between Atlanta Tigers vs Orlando Phantoms the game to watch. However, with the Tigers opting out of this past weekends game and therefore giving the Phantoms a victory by default eliminated Eastern Alabama Predators from post-season play by way of tie breaker and setting up the Eastern Conference first round match-ups.

(1) Unconquered Cobras - Cobras will have the ability this weekend to sit back and watch their in conference opponents fight for the right to move on. With a win over the Georgia Crushers they enter the post-season undefeated and the top seed in the east.

(2) Alabama Blackhawks – With the victory over Steel City Raptors, Blackhawks solidified the No. 2 seed in the east. With the win, they have guaranteed themselves the right to host a first round game.

(3) Columbus Storm – Storm found themselves in a tough fight this past weekend. One in which they should have been able to walk away victorious. However, that was not to be the case. The loss however did not affect their position in the Eastern Conference as they enter the post-season No. 3 in the east giving them the rights to a home game in the opening round.

(4) Georgia Thrashers – Thrashers come into the post-season as the No. 4 seed by way of tie breaker over Tuskegee Ayrmen.

(5) Tuskegee Ayrmen – Ayrmen are the No. 5 seed due to losing more home games than the Georgia Thrashers and therefore will take to the road in round 1 of the post-season.

(6) Metro Atlanta Horsemen – Horsemen enter the post-season No. 6 in the east and will face-off against Georgia Storm for the first time this season.

(7) Orlando Phantoms – Phantoms were able to find a way into the post-season after a loss by the Steel City Raptors this past weekend and a win over the Atlanta Tigers. Although they needed assistance to reach post-season play, they have kept their hopes alive and will take to the road this weekend.

For the first time in APDFL history the first round of eastern conference post-season play will see each team facing one another for the first time. The Eastern Conference round 1 match-ups are as follows:
(1) Unconquered Cobras – Bye
(7) Orlando Phantoms @ (2) Alabama Blackhawks
(6) Metro Atlanta Horsemen @ (3) Columbus Storm
(5) Tuskegee Ayrmen @ (4) Georgia Thrashers